I am a widely-published Australian poet resident in London since 1979.
I started writing poetry in the mid-1960s at Melbourne University after discovering the Penguin Book of Australian Verse and my first poem was an anti-hanging piece against the execution of Robert Ryan titled Lifeline, in Poetry (Poetry Society Magazine, Sydney, 1966).

(one of 5 poets reading for Australia's year)

Adult and Junior, which continued every year until 2019. I judged the Junior Section. BBAC published illustrated anthologies each year.

In 2004-5, I co-ordinated on behalf of Writers Inc an Arts Council-funded Young Writers' Mentorship Project to work in twelve secondary schools in the Boroughs of Barnet, Ealing, Enfield, Haringey and Islington. Other participating poets were Mario Petrucci whose idea it was originally and Sue Hubbard. The Project was very successful and showed the need for such one-to-one mentoring as a spur to fledgling writers for they rarely have such direct access to established writer-tutors.

On July 17, 2006, I was Poet in Residence for the third annual Parks and Arts Healthy Lifestyle Walk in Hornchurch Country Park, London Borough of Havering organised by their Parks, Arts and Regeneration Services.
Co-ordinated as an Arts Walk by Arts Officer Chris Cole, the idea was to use the Walk to celebrate walking and healthy eating. There were 50 participants under very sunny skies. Part of my brief was to write a poem of the Walk to accompany the photographs, poems and reflections sent in by the participants. The poem was displayed as a poster in libraries and around the Borough and sent to local media.

In 2007, as a result of the Stevie Smith Festival and an increased interest in poetry in Palmers Green, Joanna Cameron, Myra Schneider and I set up the Poetry in Palmers Green twice-yearly readings. Some time after, we were appointed Poets in Residence at the Palmers Green Library and we have done regular workshops and occasional readings there.

The Guardian Poem of the week 5th Nov. 2012: The Year of the Tree by Katherine Gallagher. Nature and mythology combine in this playful account of lugging an oak tree through the London Underground Here's the link on The Gardian's website.

I stopped doing my long running Poetry & Voice Monthly Workshop at Torriano Meeting House in July 2016. However, I continued doing one-off workshops at Palmers Green Library or for the Second Light group.

2017 - Acres of Light's promotion in Australia

Trip to Australia, August-October 2017 to promote Acres of Light, including readings in Bendigo, Maldon, Canberra and Sydney.

2018 - I've written a Christmas poem for Candlestick Press, 'Instead of a Card' programme.

I continued with my long-running monthly Barnet workshop, normally held at the Friends' House, Leicester Road until 2020 when we were able to use Zoom. The number in this group has varied but despite Covid-19, we've kept going, with Lindsay Fursland hosting us via Zoom. The dates for the 4 next months are: Sept 14, Oct 12, Nov. 9, Dec 7, . . .

March 2000 with Ted Slade for the Poetry Kit on Poetry Kit.

Interview by Krystana Kubiac, (Australian Broadcasting Commission) for the POETICA
I was very fortunate to be interviewed in June 2009 by Krystyna Kubiak for the long-running ABC Poetry POETICA programme, Radio National. The programme, a mixture of chat, poetry from my 4th full collection Circus-Apprentice, and music appeared on 27th June 2009 and the following week 2nd July. The programme was repeated two years later.
Sadly, a few years on and despite vociferous protests, the POETICA Programme was axed, victim to cuts in ABC funding. The closing down of this very popular slot, facilitated over many years by Mike Ladd and his team, bringing poetry and translations from across the world, is an inestimable loss to poetry-lovers in Australia and overseas, and to poets themselves. A great shame. Not by bread alone . . . .
Many thanks to Mike Ladd and Krystyna Kubiak.
To listen to the recording of the interview, please click here and wait for five/ten seconds until it starts. 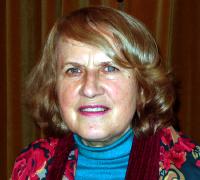